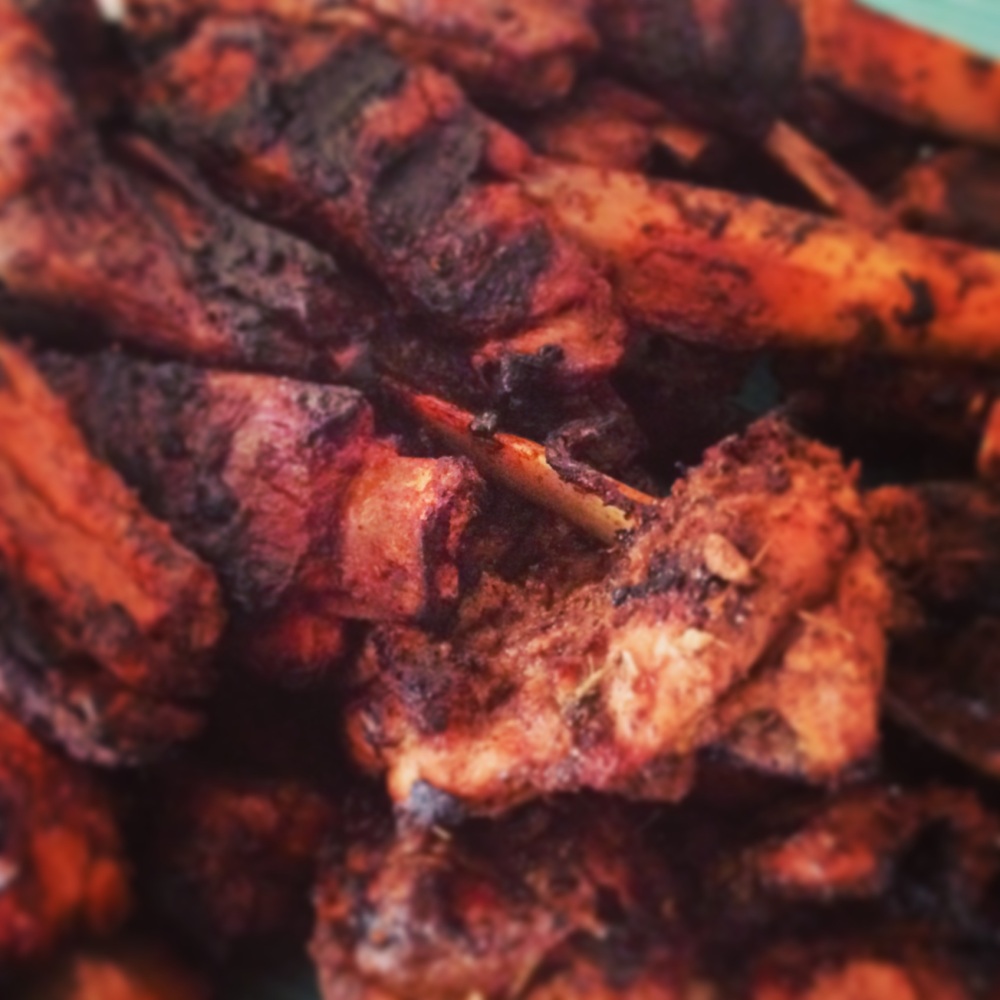 I’ve posted these lamb ribs through Instagram, but just the photo. Here’s the monologue and recipe (and doesn’t include details on the grilled chicken thighs, bottom right of the photo).

I’m not sure how common lamb ribs are for people? Personally, I wasn’t properly introduced to lamb until I lived in England, but my indulgence of lamb began in Australia, helped by the fact that I live near Oakleigh in Melbourne, which has a very large Greek community and more butchers selling lamb than you can imagine. And when you can get ribs at $10/kg ($5/lb), it’s hard to resist. My love of ribs started with the pig, and while if pressed I would choose the pig over the lamb, lamb ribs are undeniably beautiful when BBQ’d well (a discussion of the best animal ribs will have to be discussed in another post). I may have posted recipes for lamb ribs previously, but here is another recipe. I find lamb ribs tend to be a bit fatty, so I prefer to braise first, let cool, then BBQ with basting for optimal caramelised flavour and tender and moist meat. If planning ahead, braise the day before, let cool, separate the ribs from the liquid, and keep both in the fridge. So here goes:

Pre-heat the oven to 200 C (425 F). Mix all the ingredients (except the lamb) in a deep oven dish. Add the lamb ribs and mix thoroughly. Add enough water so that the level of water is just below the level of the ribs (this will likely be about 1 cup, depending on the oven dish). Cover the lamb ribs with a layer of baking sheet (parchment paper), followed by a lid or layer of aluminum foil. Place the dish into the oven and cook about 2 h. At the 2h point, check if the lamb is fork tender. It should be, but if not let cook no more than 30 minutes. Remove from the oven and let cool (removing the lid and aluminum foil will help) for an hour. At this stage the lamb ribs can be removed from the cooking liquid and placed in the fridge for later, if necessary. Ideally, strain the remaining liquid through a sieve into a container for later, else set aside without straining. When ready to serve, grill the lamb ribs on a pre-heated BBQ grill for about 15-20 min, basting regularly with the retained braising liquid. If the meat and liquid were chilled in fridge overnight, the basting liquid will solidify due to the fat content and need to be heated prior to basting (1 min in the microwave solves this!). Trust me, these are great!